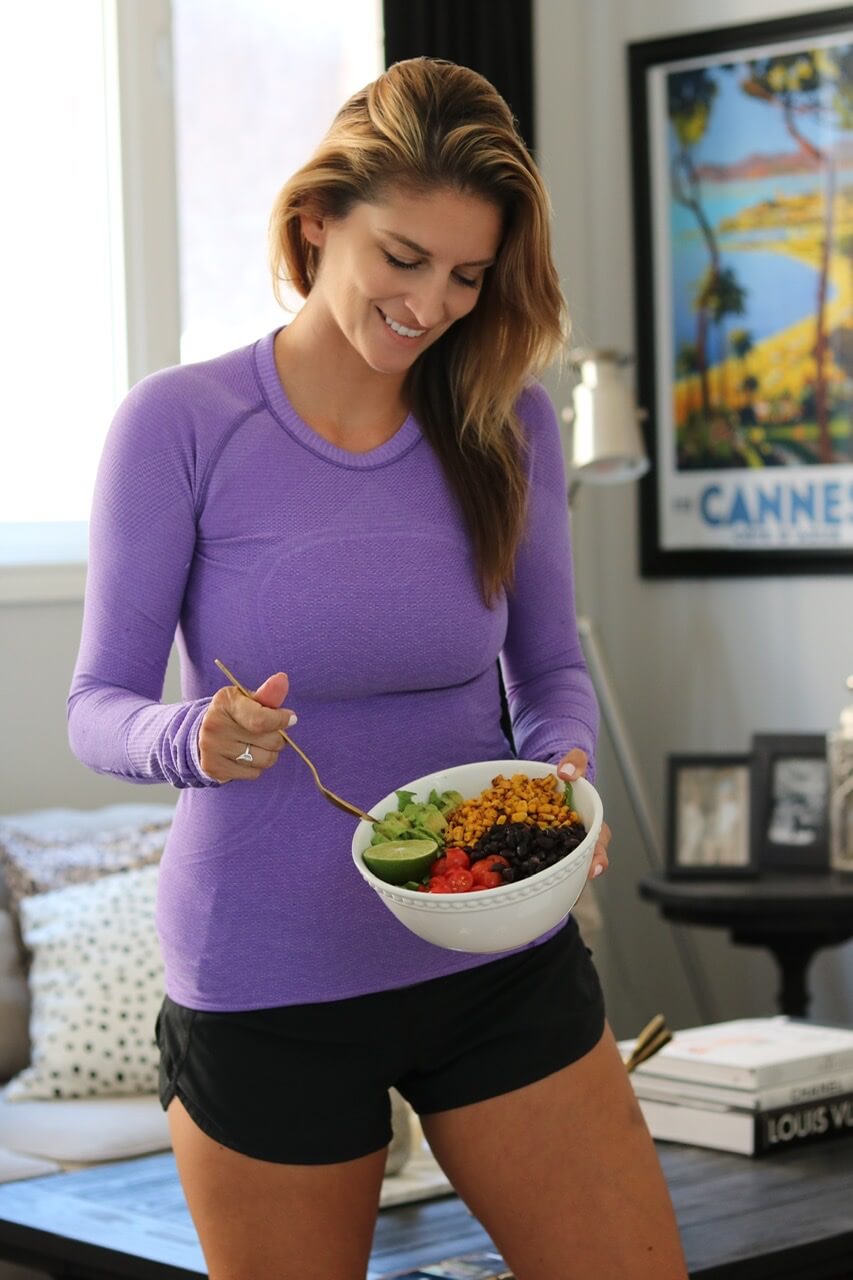 This post was created in partnership with Pacific Foods. However, all opinions are always my own.

After months of being stuck inside I’ve been working overtime at staying active and on the move in the beautiful summer weather. I’ve been spending a few days a week playing soccer with my son, and I’ve tried to get on my paddle board at least 4 times a week. Throw in running every few days, along with plenty of playdates outside bike riding and playing hide and seek, I’ve been at my healthiest! 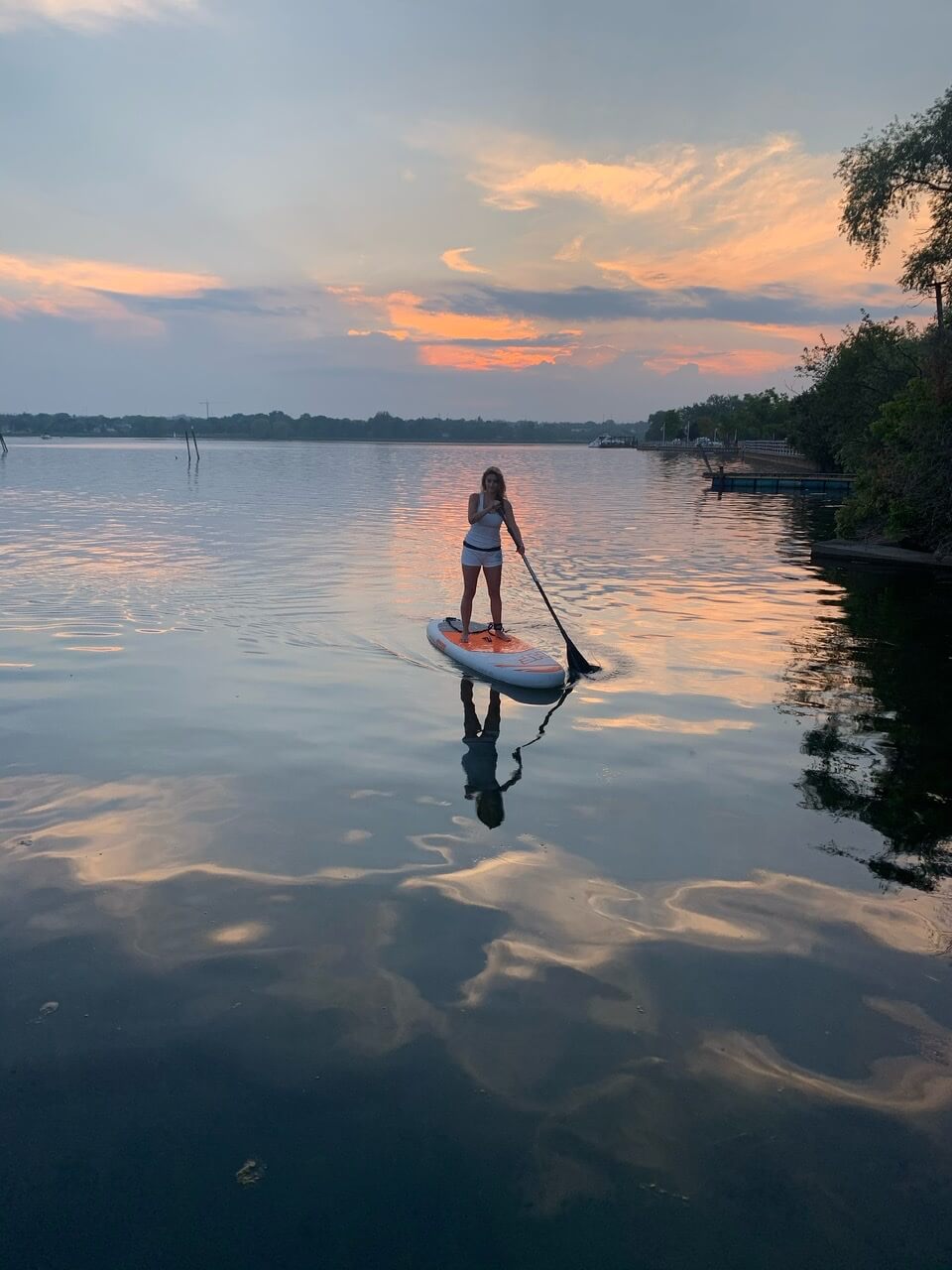 Something that’s been just as important to me as being active outside is nourishing my body with healthy food. I feel like my lifestyle has shifted for the better, and I want to match what I’m putting into my body with fresh ingredients.

As some of you have seen over the last few months I’ve been cooking up a storm! I’ve been testing new recipes and tweaking old ones with the addition of more fruits, vegetables, and healthy ingredients. I’ve been shopping more at local farms and markets, and I’ve even been growing my own vegetables!

After spending most of the day on my paddleboard, when I break for lunch it’s been heartier than usual since I’ve been burning calories paddling. My lunches have been a bit later and therefore my dinners have been as well, so I’ve been making sure to plan ahead to make a healthy meal to make up for all of the work I’ve been doing.

I tweaked an old recipe to make it more of my own, and I’m hoping you love it as much as I do. This meal can be made for lunch or dinner, and it’s easy to pack up to take with you as well for a picnic this summer. It’s my Mexican Quinoa Bowl!

I’ve added the recipe for you below but here’s what you need to know – you can mix and match some of the ingredients to your taste. There are a few things that I would suggest keeping though that I’ve found to be the best part of the bowl!

First off, instead of using water for the quinoa, I’ve been using Pacific Foods Organic Vegetable Broth. The quinoa tastes so amazing with this organic broth, and this broth is also gluten free and vegetarian! I’ve found that it’s so important to pay attention to the ingredients I’m using since I’m looking to nourish my body, and using products that are certified organic and made by companies that use sustainable practices is an important part of this. This is why I choose Pacific Foods Organic broth when I am cooking. They don’t use any additives or preservatives, and Pacific Foods chooses to focus on local ingredients and sustainability which is something I look for when choosing what ingredients I cook with for myself and my family.

If you are including corn, charring it in the Pacific Foods Organic Vegetable Broth is another tasty tip I would suggest! It gives the corn so much more flavour. 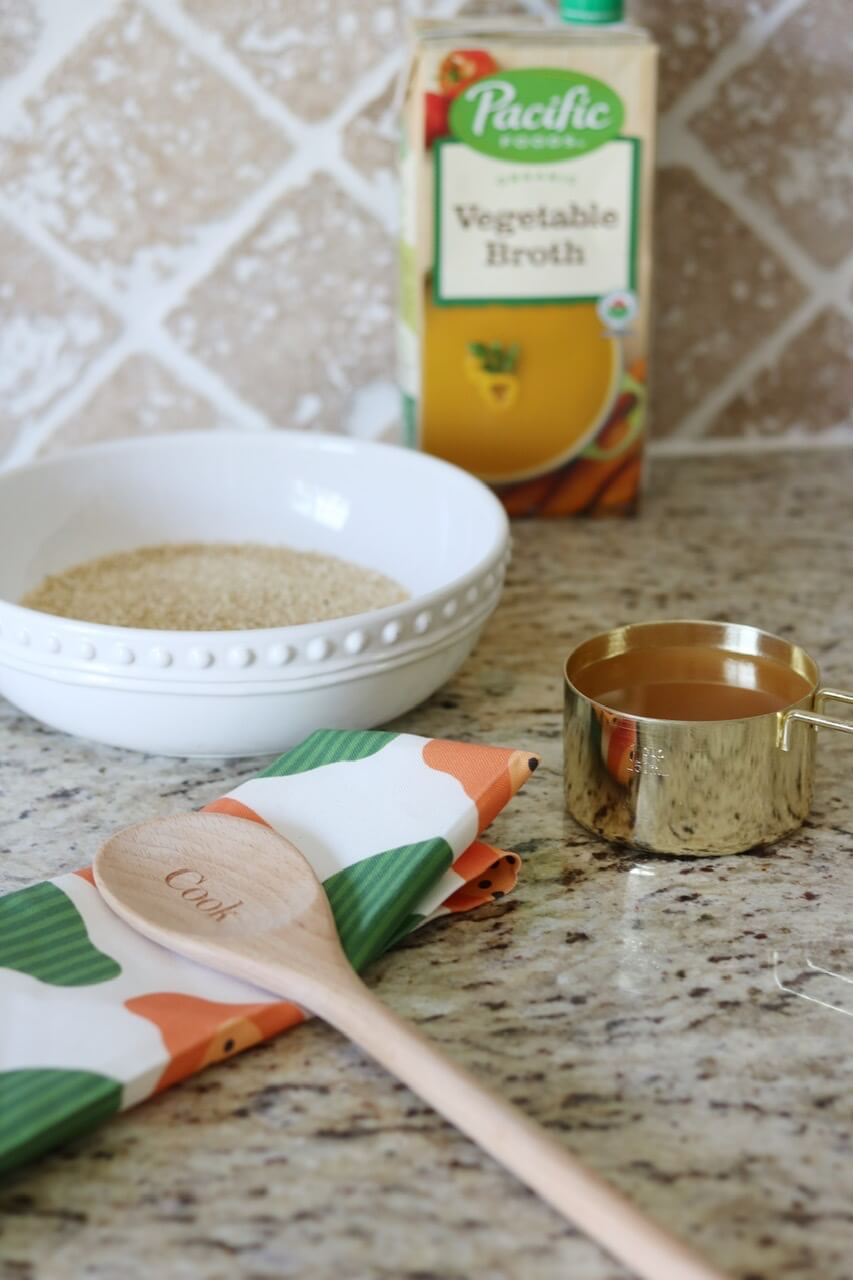 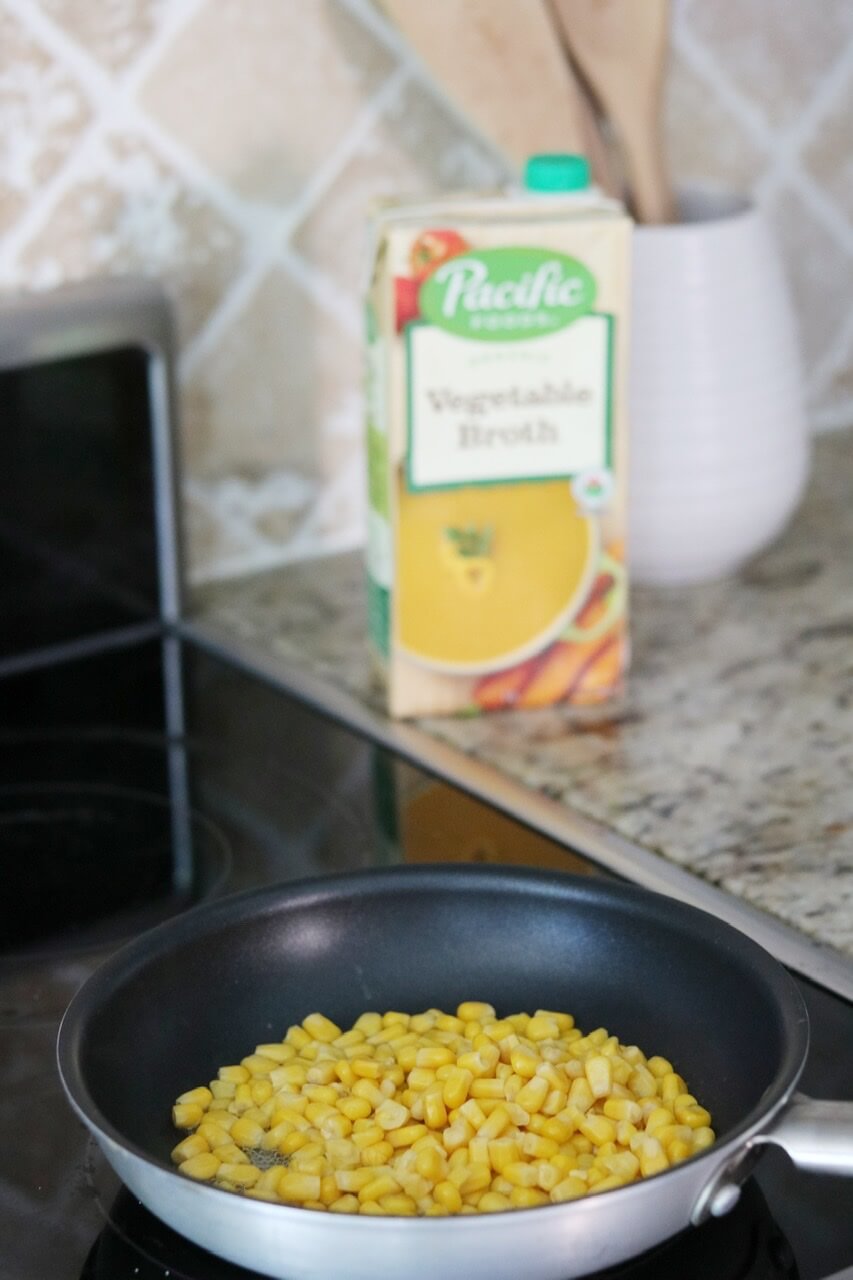 When it comes to these bowls sometimes I add cheese and sometimes I don’t – in this case I didn’t but it’s really up to your taste for what else you would add.

I hope you love this recipe as much as I do! 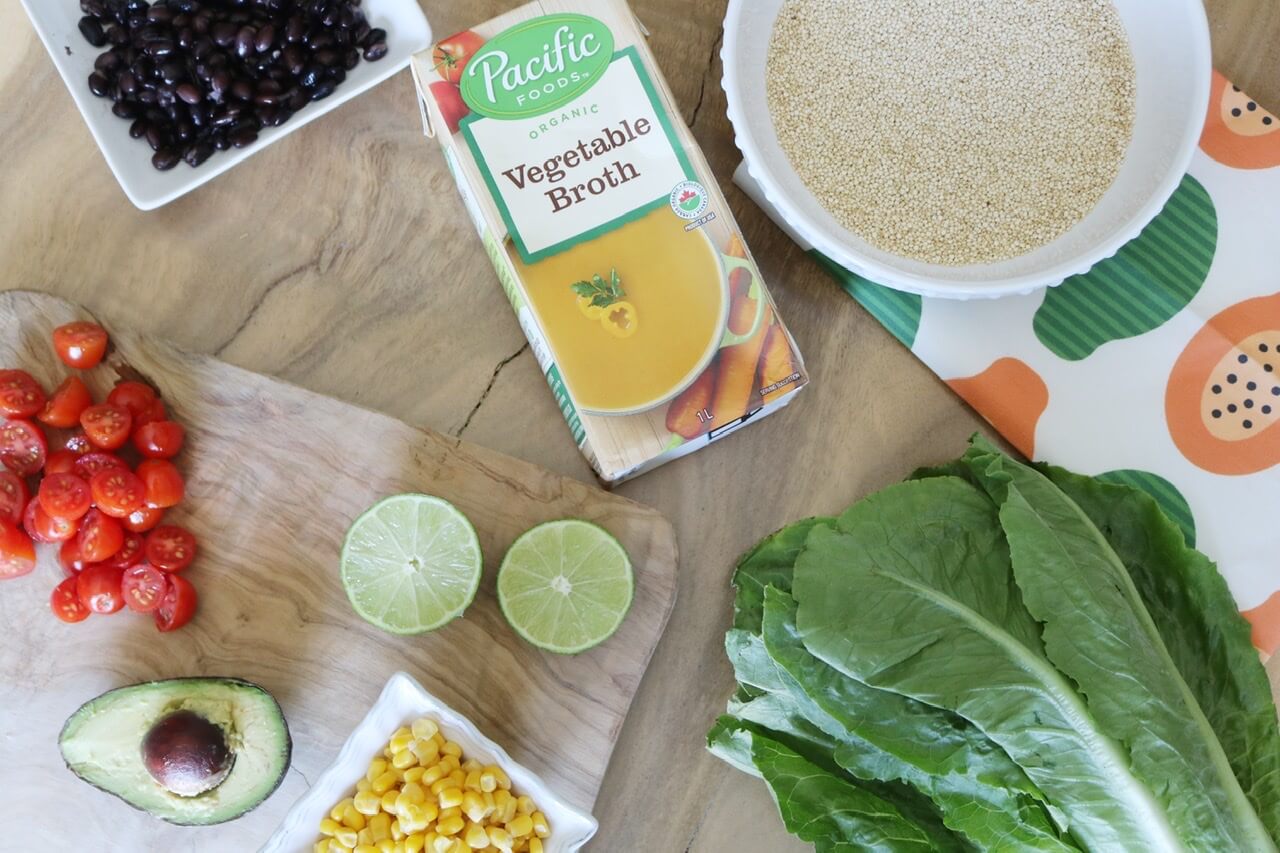 1. Add quinoa and one and a half cups of Pacific Foods Organic Vegetable Broth to a pot and bring to a boil. Once boiling reduce heat to low and cover with lid for approximately 10 minutes. Lightly fluff with a fork.

2. Add corn to a pan with a 1/4 cup of Pacific Foods Organic Vegetable Broth. Char corn until blackened and then set aside. 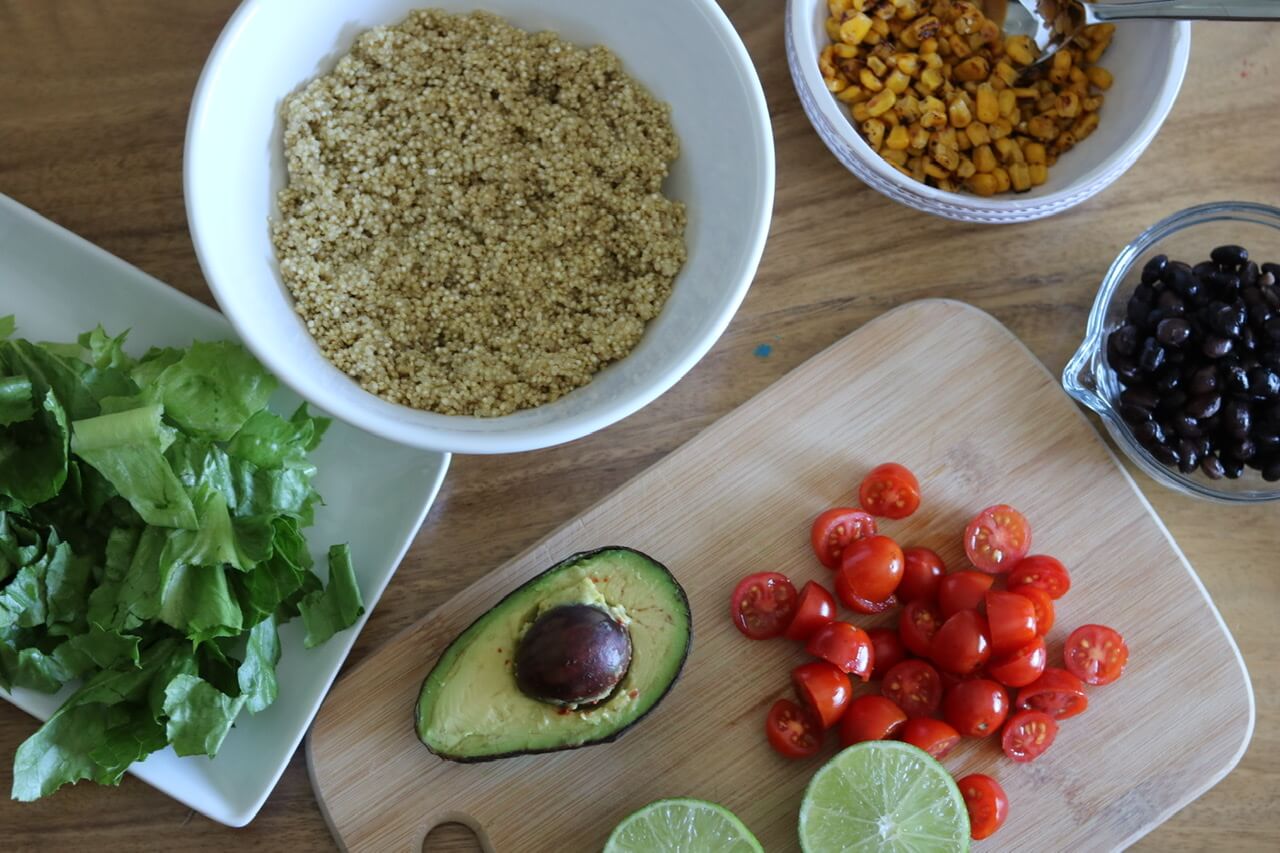 4. Whisk together olive oil, vinegar, chili powder, garlic, cayenne pepper and salt and pepper in a bowl and set aside for your dressing.

5. In a large bowl add the quinoa, then layer the lettuce, and all other ingredients. Top with dressing and serve! 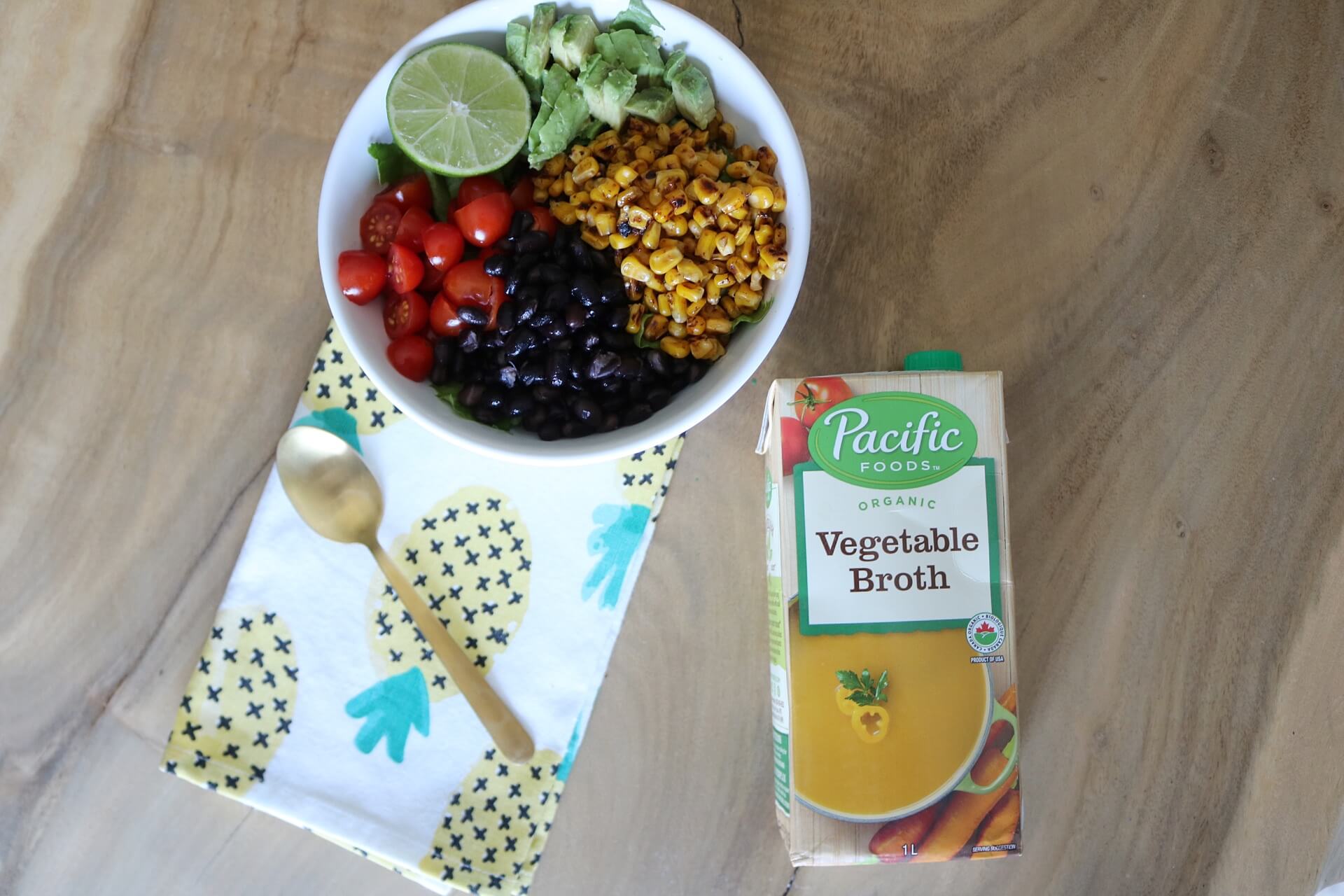 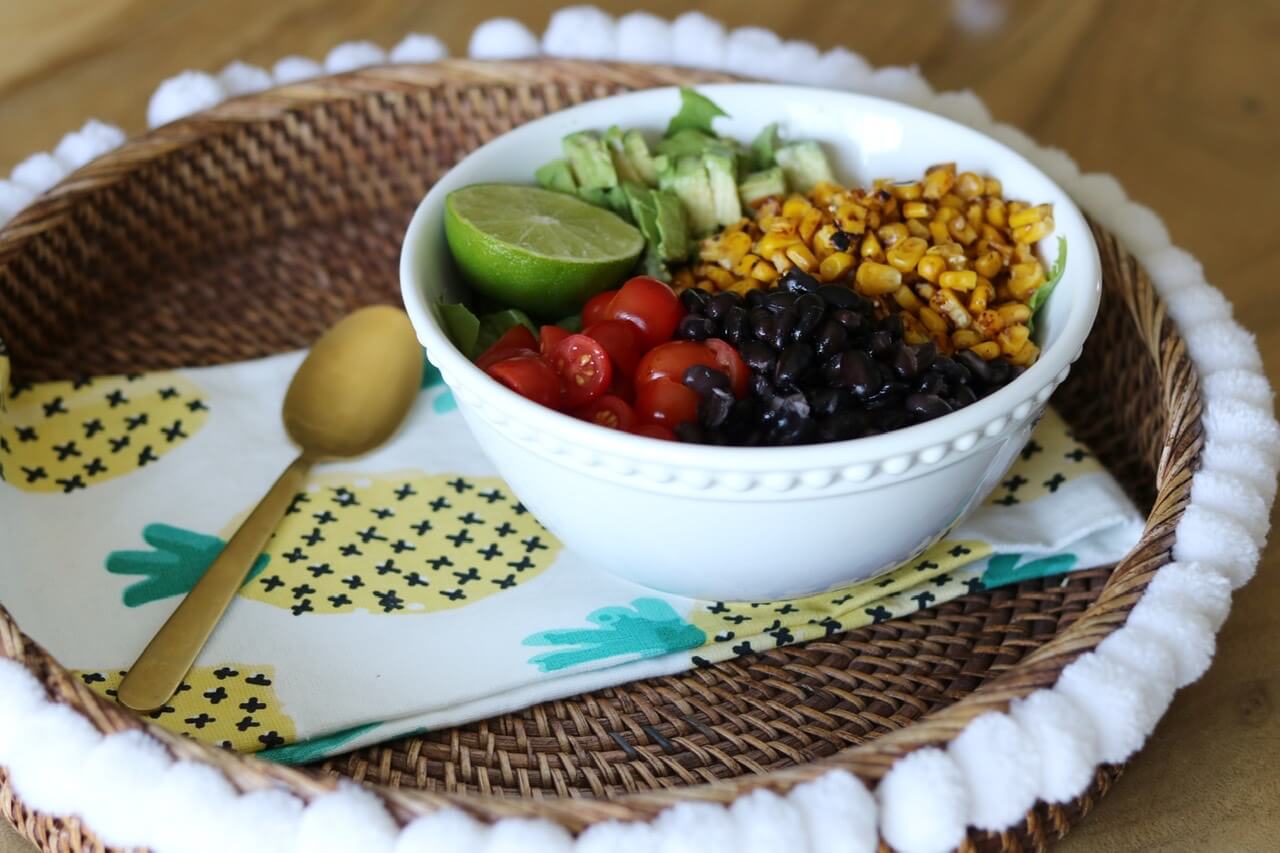 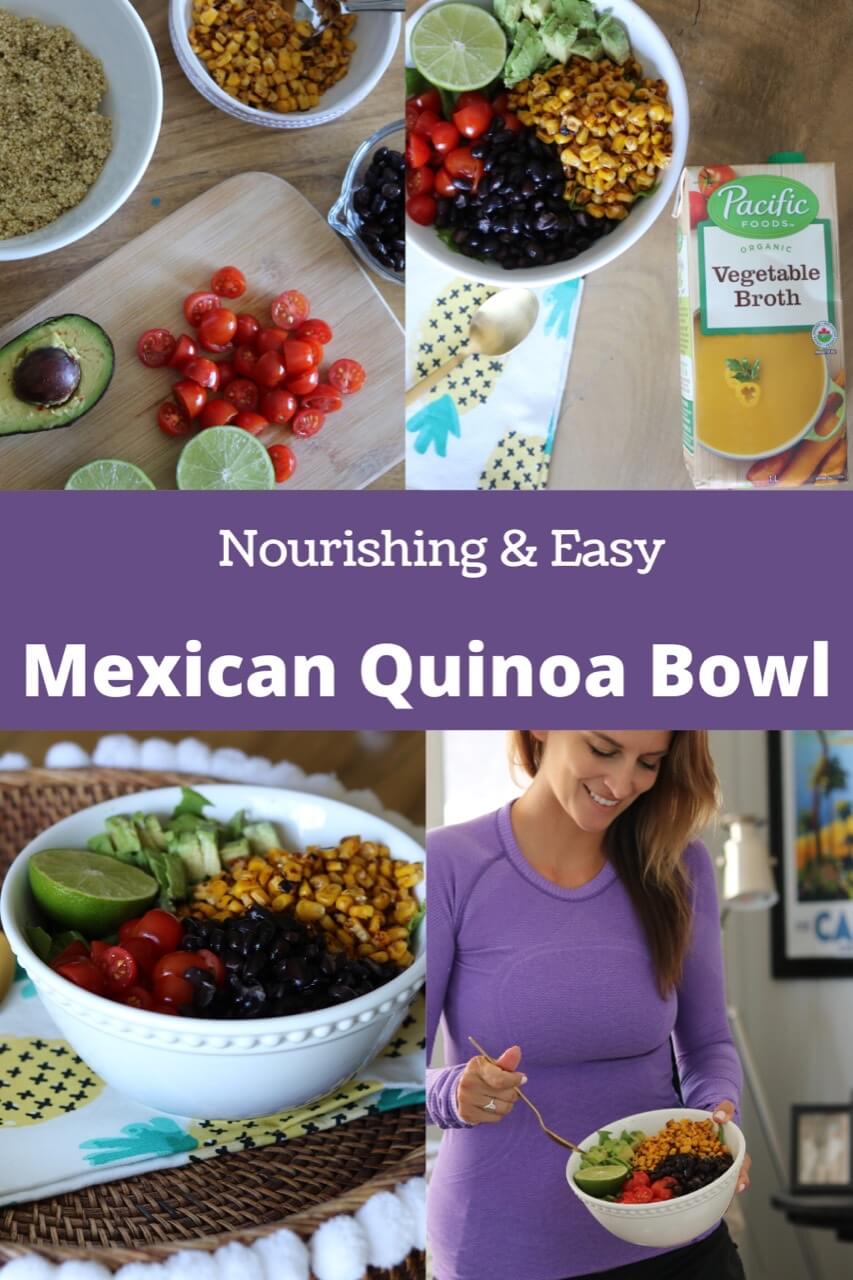