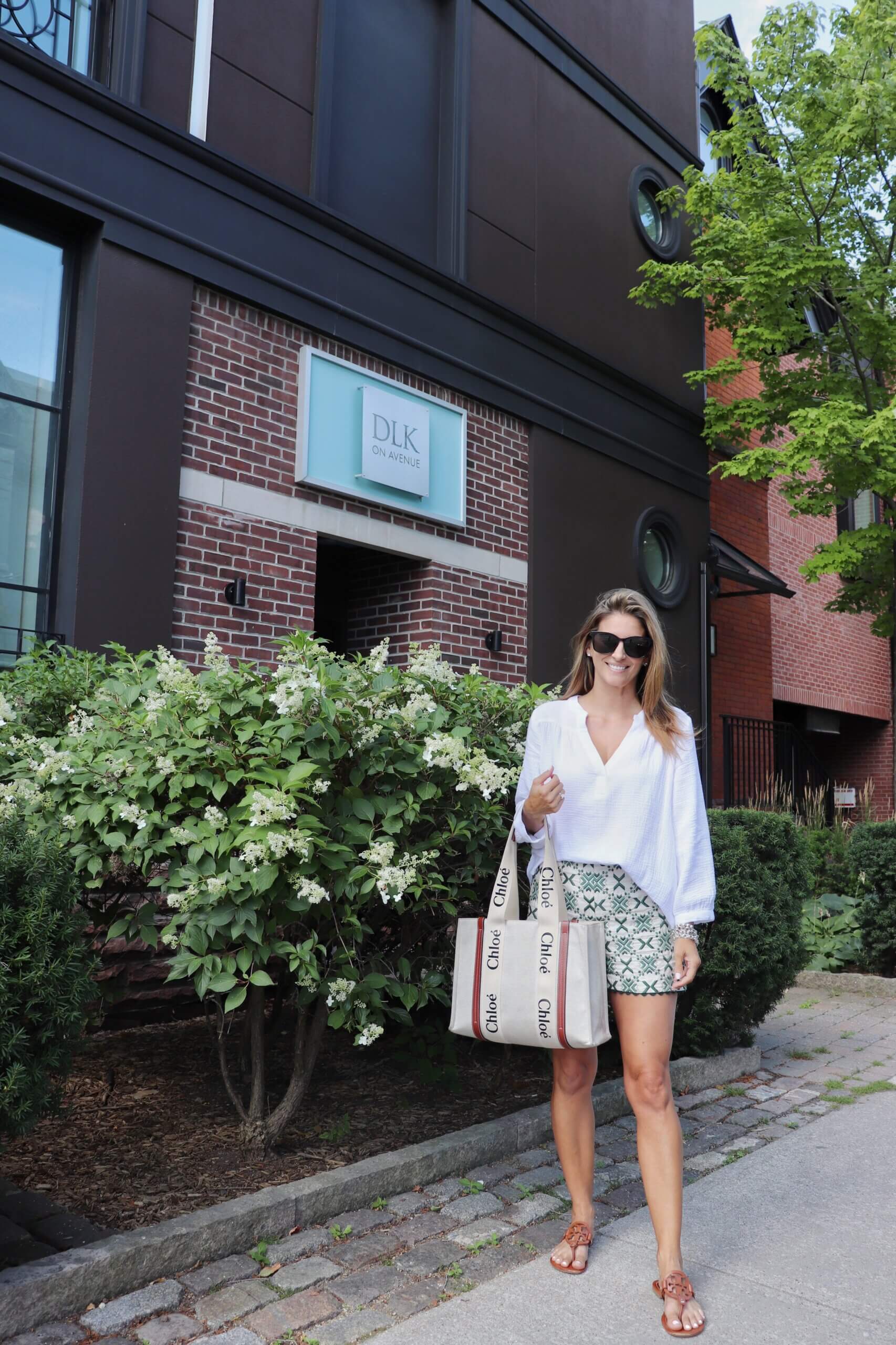 I’ve written about DLK on Avenue on the blog before and shared about my experiences with them on Instagram, and I was so excited to return to them again last year for a whole new experience!

Have you ever heard of Emsculpt NEO before? I had heard a few things here and there about it’s predecessor Emsculpt, but I was so excited to try the Emsculpt NEO after I read more about it.

DLK on Avenue brought in this new technology a couple months ago, and it’s been very popular.

There are always two factors that I look at when deciding to try something new and they are how invasive the treatment is, and what the negatives effects are. Once I heard that Emsculpt NEO was non-invasive AND there were no negative effects after treatment I was ready to give it a try.

Emsculpt NEO is the first of it’s kind technology that combines radiofrequency and (HIFEM+) high-intensity focused electromagnetic technology which results in both fat reduction and muscle growth. It even smooths skin as well.

Typically Emsculpt NEO is done in a series of four 30-minute treatments. Three days before my first appointment it was important to increase my water intake, and similarly after my treatment increasing my water intake was also key to the process. Otherwise there was no other preparation for my first session.

Being back at DLK on Avenue was lovely. The building itself is so pretty, and I love how welcoming the staff is. They are always happy to chat, and offer a water for what always seems like a very short wait until my appointment time. 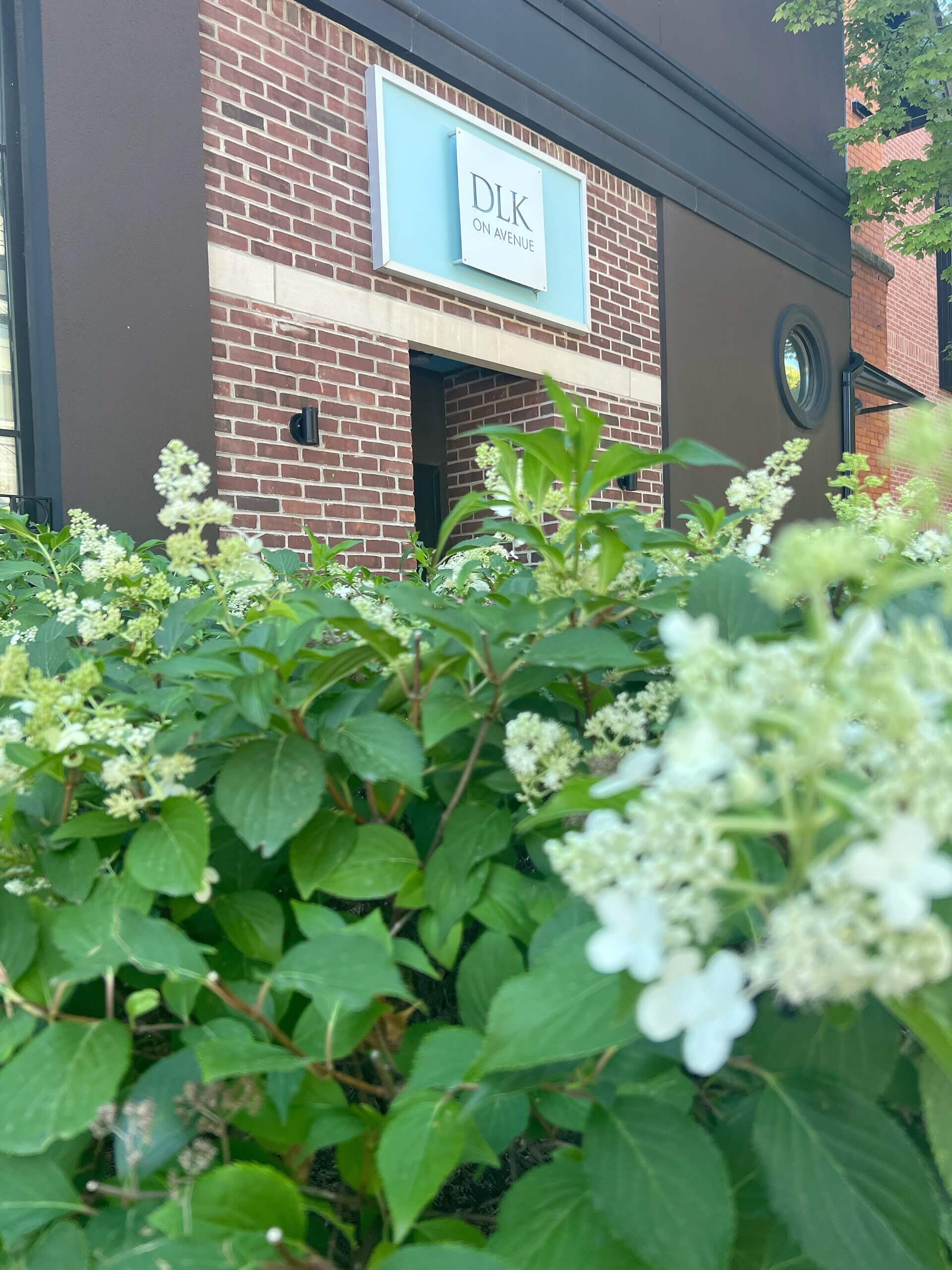 When it came time for my appointment we did some measurements and “before” photos to track my progress, and then we were ready to go! I wore shorts and a top which made it a bit easier since I was targeting my stomach, but they had shorts on had for anyone who needed a quick outfit change depending on the targeted area they were working on.

The treatment areas you could choose from were the belly, buttocks, arms, thighs and calves. The Emsculpt NEO paddle is placed on your target area (again for me it was the stomach), and then it was time to get started. 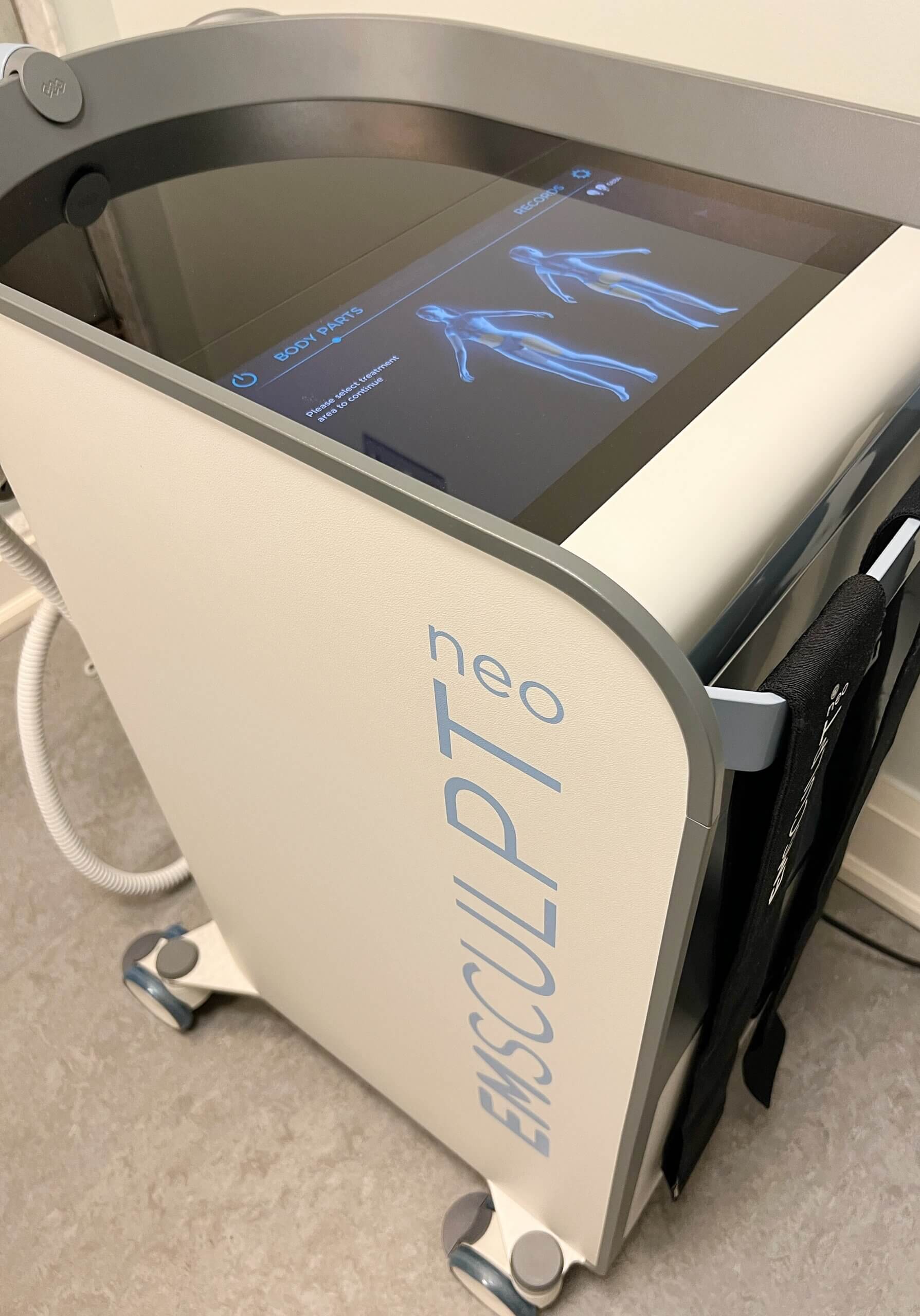 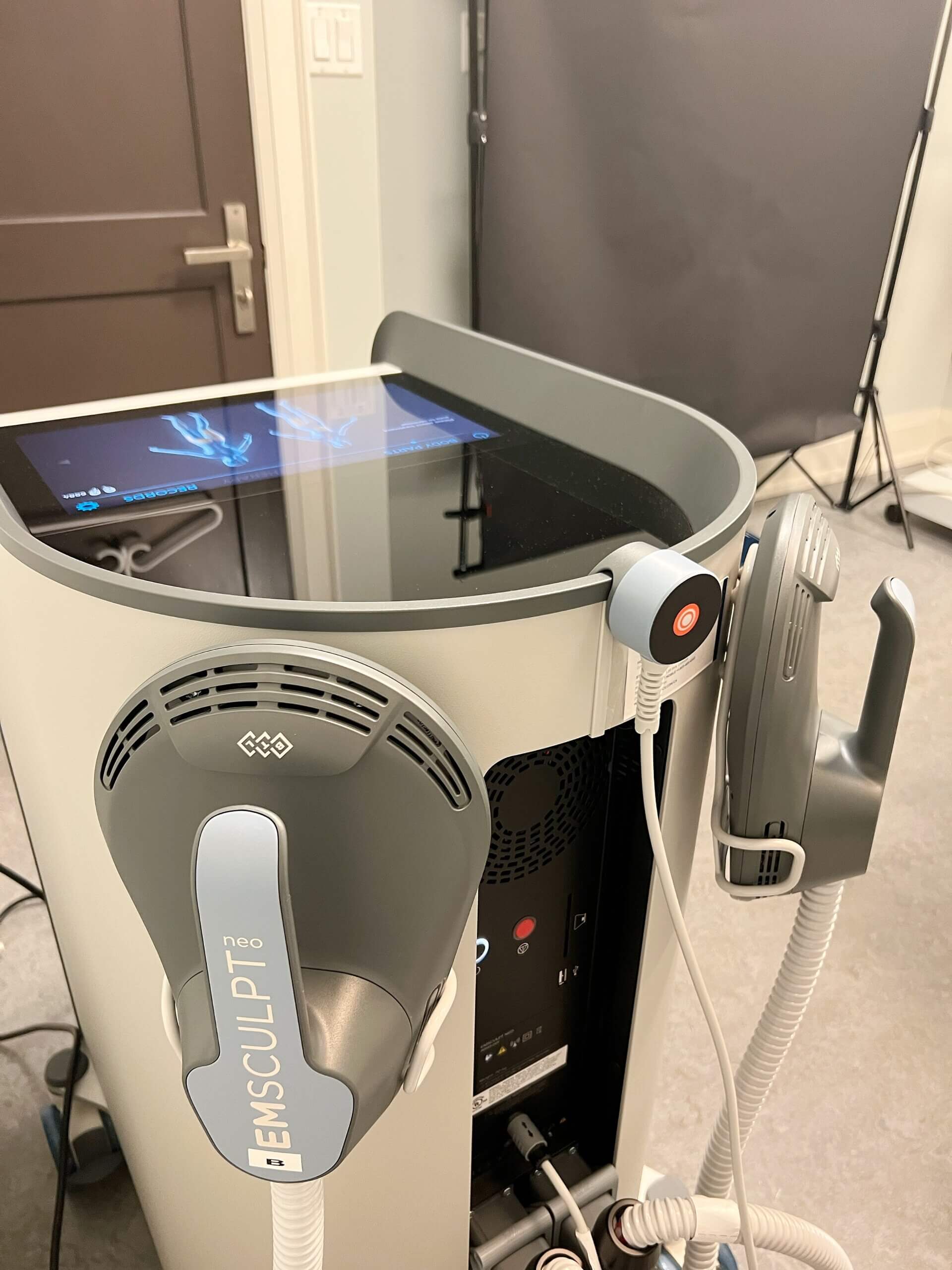 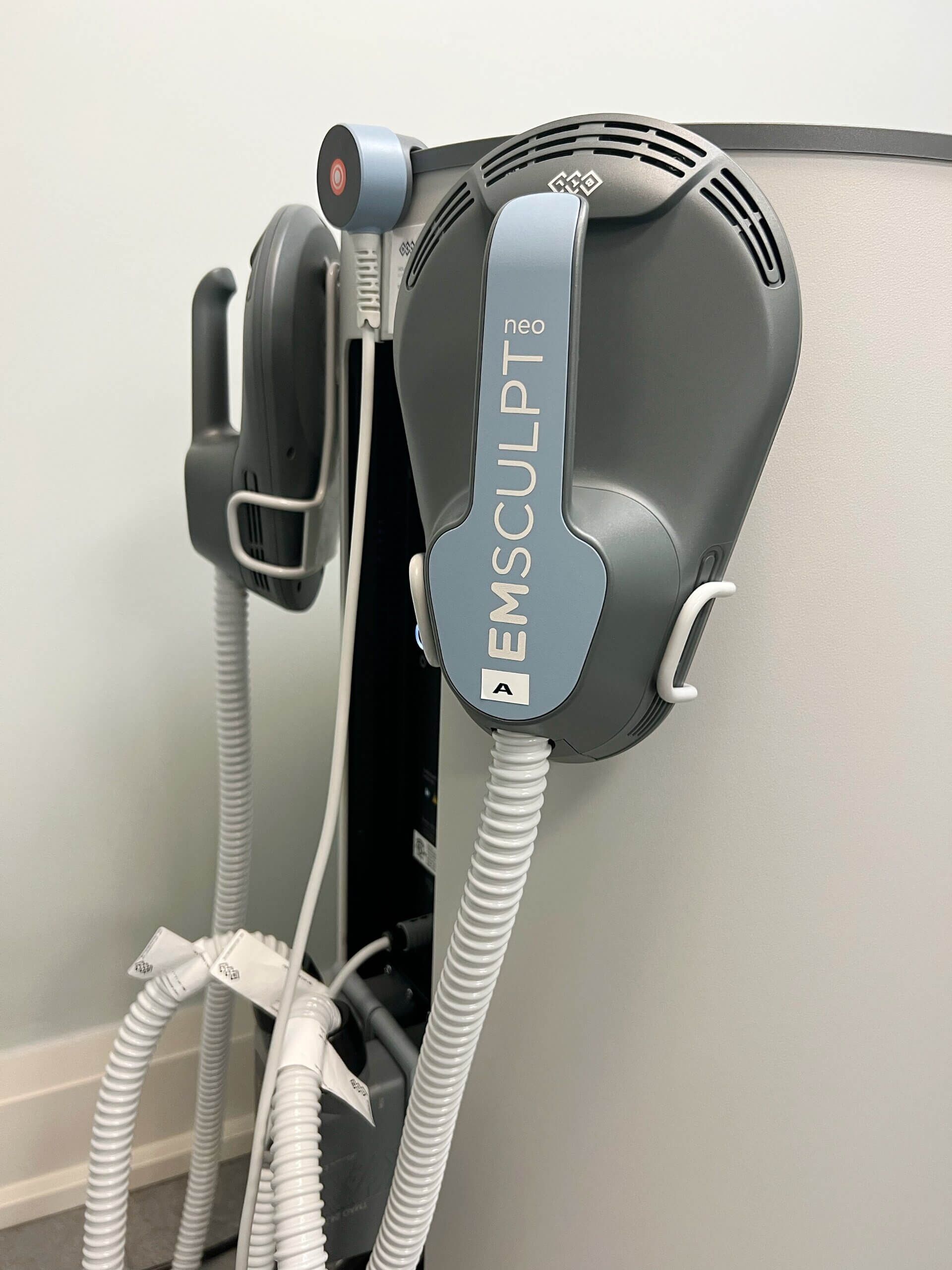 The radiofrequency heating causes the muscle temperature to rise by several degrees (similar to a warm-up prior to a workout), but it’s never an uncomfortable heat. I actually didn’t notice it too much, and it’s cool to know that as the temperature in the fat cells rises it causes their permanent damage. Later they will be slowly removed from the body naturally.

The device starts with the muscle-contracting phase which is a little hard to describe. It doesn’t hurt at all – for me the contractions were intense, but nothing I couldn’t handle. The second phase is a recovery phase where you feel a light tapping in short spurts. This phase breaks up the lactic acid built up from the contractions so you aren’t left with cramps or muscle fatigue. 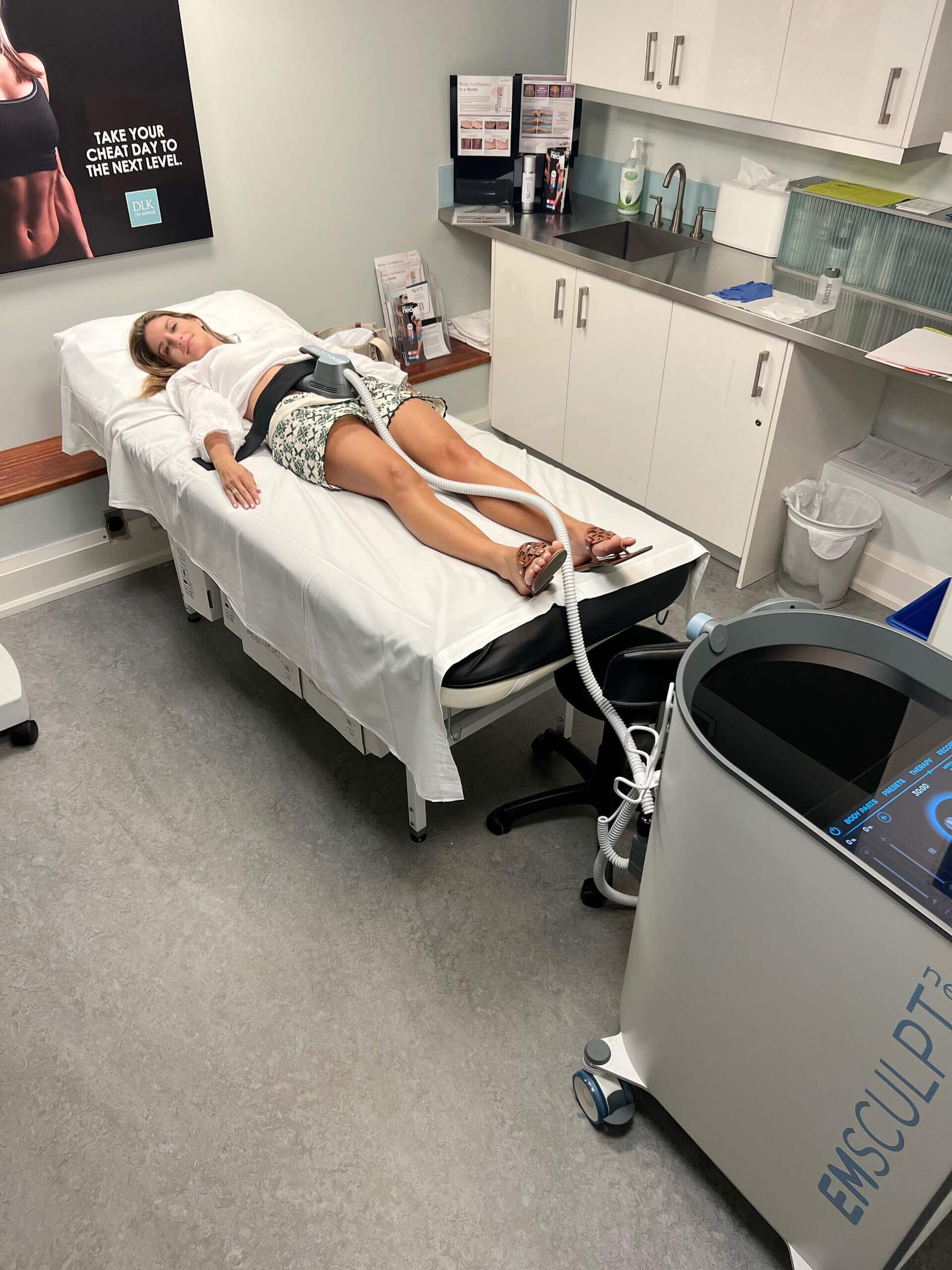 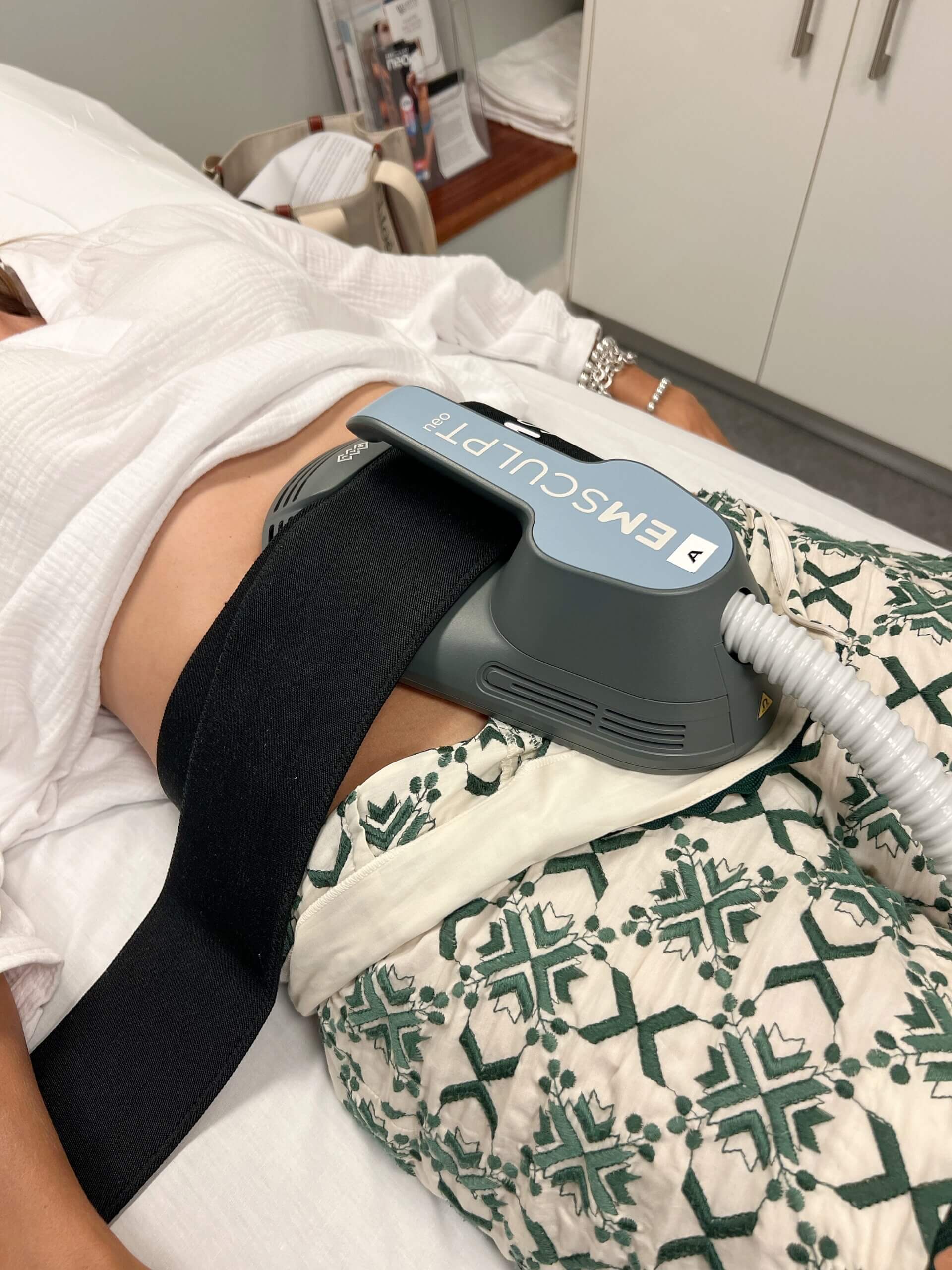 Once my thirty minutes was done I expected to feel a bit of soreness getting up from the table since my body had just done what could be the equivalent of 20,000 sit ups, but I hopped right up and was ready to move on with my day. I knew that there was no downtime with Emsculpt NEO, but I couldn’t believe that I didn’t feel anything.

With session one done I have three more to go in my series. It’s recommended that you attend your next session 5 days after your last, but no more than 10 days later. I have my next session booked this Friday, and I’ll take you along with me on Instagram Stories that day!

I will update this post at the end of my four sessions to let you know how everything went. I’m so excited to keep going with this process. The first session went so well that I’m looking forward to continue.

If you are interested in Emsculpt NEO you can learn more on the DLK on Avenue website here!

Thank you so much to DLK on Avenue for hosting me!

My second visit to DLK on Avenue for my Emsculpt NEO treatment went even better than the first!

I did increase my intensity quite a bit from 55% contractions on my first visit to 80% this time. I found that my session felt quite a bit quicker since I knew what to expect. I felt stronger this time so increasing the intensity didn’t seem like a big deal at all.

A couple days after this session I did see a difference in my upper abs – to me they looked a bit more defined which I was VERY excited about. The final results won’t come until three months after my last session, but seeing something happen so soon was very exciting!

Each session gets easier and easier in terms of knowing what to expect, and feeling more comfortable with the contractions I’m feeeling.

Although I never seem to know when each pulse is going to come, I’ve learned how to breathe during them so I’m very comfortable, and that’s helped me relax with each session.

Although I can’t say the sessions themselves are relaxing enough to take a nap, I have found by the time I’ve made it to this third session the 30 minutes are so much quicker than the first couple sessions! 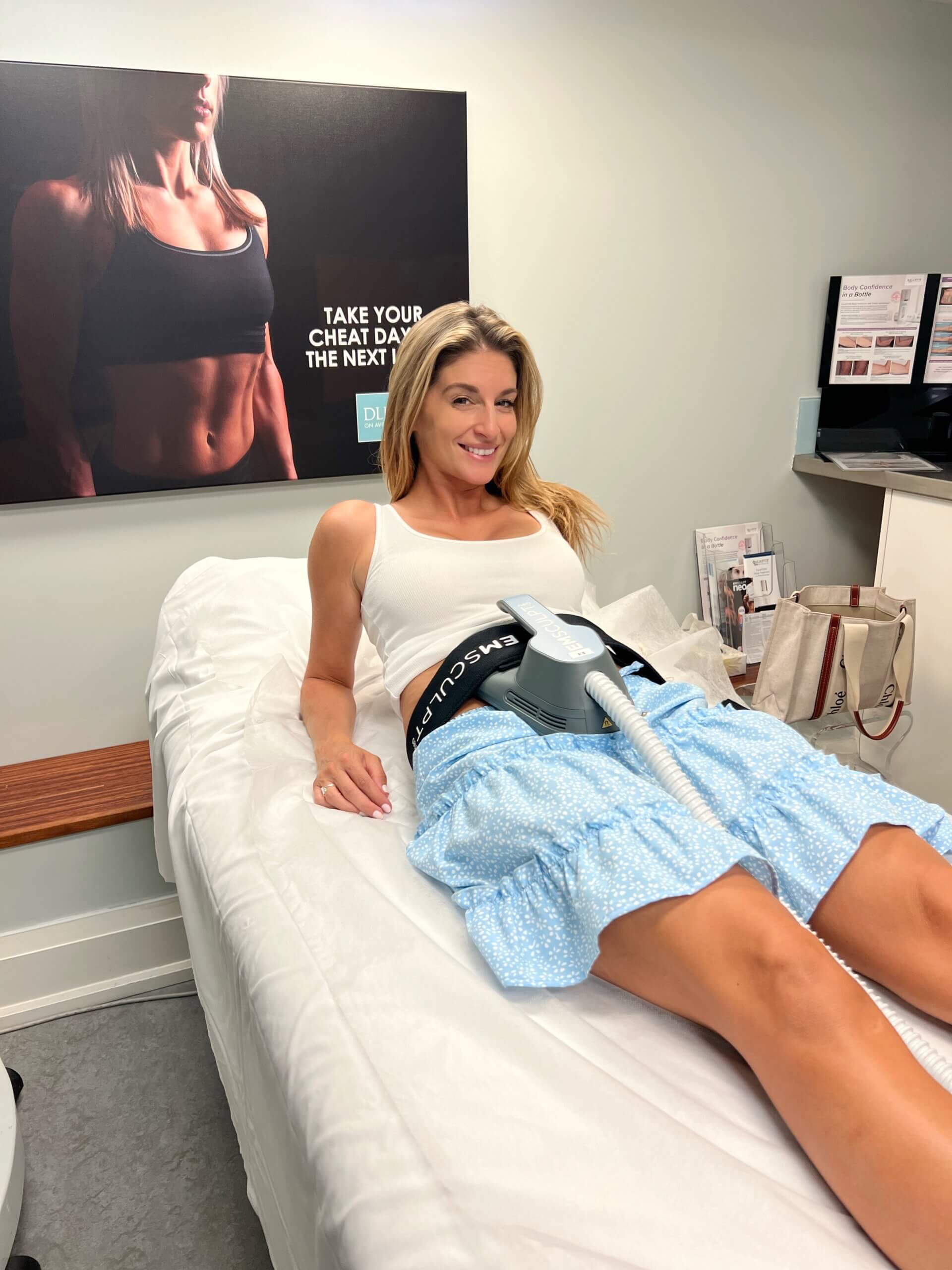 I can’t believe after four short sessions my series with Emsculpt NEO is done! The biggest difference I’ve noticed at this point is that my core feels stronger. I definitely feel like my abdominals are stronger now than when I started the process.

Normally three months after the final Emsculpt NEO session a person sees their full results, so I’m excited to report back then! I did take detailed “before” photos when I started, and I can’t wait to see the difference at the end of this process.